An American employee of the US Embassy in Tajikistan, Mr. Kevin Covert, and members of the US Agency for International Development (USAID) visited the demo section in the Yavan District for the cultivation of strawberries using a modern method. At the beginning, Farrukh Shodimatov, USAID project manager for women's entrepreneurship through empowerment, which acts on behalf of NABW Tajikistan, expressed its preference for the production of strawberries using a modern method. He said that the owner of this demo site is the participant of the USAID project, Murodby Kholikova and the seedlings of early and high-quality strawberries were provided by the project, which in turn were brought from California USA for cultivation by a modern method. He also also said that the same demo sections were created by the project in the districts of Bokhtar and Jaykhun. Last year, within the project, two demo sites were established in the Vakhshregion. According to the delegates speech, the goal to support women entrepreneurs is to improve their income, reduce poverty and help improve the lives of residents. 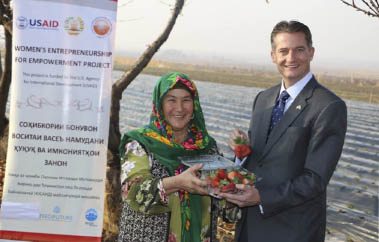 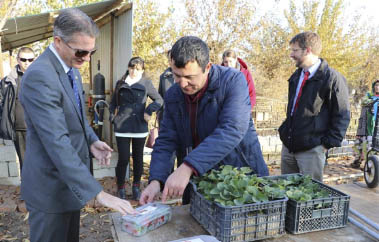 The NABWT is a membership organization and unites in one network about 3000 women - entrepreneurs and artisans of the country. It renders services to physical and legal bodies all around country.